All of our latest thinking, insights and opinions from the team.

The future of fashion marketing

Coming to the close of the shocker of the year that is 2020, we take time to reflect on how the fashion industry is evolving, and what that means from a marketing perspective…

Change in buying habits – from partywear to loungewear

It’s fair to say that there’s not a lot of partywear being bought at the moment, with Christmas parties cancelled and gatherings limited to certain numbers. There was a concern that consumers would move away from buying fashion for the fear of being all dressed up with nowhere to go.

However, this is where loungewear stepped in. A study by interaction management firm Epsilon-Conversant found that demand for loungewear and casualwear surged by 49% year-on-year during March and April 2020. Similarly, demand for tops and t-shirts increased by 13%. Formalwear sales plummeted 25 percent during the period.

Online fashion retailers have pivoted their websites to put loungewear at the forefront of their homepages and customer newsletters. CPC for these trending sectors has been increased, and social media focused on them too.

George at Asda recently threw shade at Tesco’s fashion offering on Instagram. It’s a difficult one however, as in-house fashion buyers most likely placed orders for Christmas season partywear back in June or July, and so brands are likely to have surplus stock left come the end of the year. Which raises the question, what will they do with it?

Sustainability: Recycling schemes and clothes made from plastic

Charity Wrap has estimated that £140 million worth of clothing goes into landfill in the UK each year. Deadstock fabric and unsold inventory are weighing down the fashion industry, which is responsible for 10% of the world’s carbon emissions. Fast fashion brands are usually the worst offenders here, with stories being reported around it being too expensive for businesses to re-process returned goods, and it therefore being cheaper to incinerate or send to landfill.

As brands struggle to manage their waste, they have seen this become not just an environmental problem, but a PR problem, as consumers increasingly choose to shop with their conscience. Therefore, recycling or take-back schemes have been born, and adopted by a growing number of fashion brands.The North Face has been ahead of the curve here, and in 2018 they launched The North Face Renewed, a separate e-commerce domain featuring a collection of refurbished products for consumers who want to access affordable gear and reduce their environmental impact.

This means that damaged or returned products can be given a new lease of life rather than it ending up in landfill. They estimate that since launch, they have saved over 200,000 pounds of clothing from going to the refuse heap. Of course, the lower price point of the refurbished clothing makes the brand more accessible to consumers, opening them up to a wider audience, but far from de-valuing the brand, it also plays up to the environmentally conscious consumer.

H&M have launched a Take Care hub where one can find tips for looking after clothing, making it last longer and repairing it. Their website states: We’ve launched repair ateliers at our flagship stores in Stockholm, Vienna, London and Paris, where you can get your clothes mended or upgraded. To mend is on trend!

MoneySavingExpert.com ran an article coinciding with Recycle Week in September, listing the high street stores offering money off coupons when you return old clothing or footwear to them. These included H&M, Marks & Spencer, and Schuh. From there, they’re either sold as secondhand goods, converted into other garments, or broken down into textile fibres to manufacture other products. Sustainability aside, the incentive is here to encourage loyal customers, elongate LTV, and of course from a brand perception point of view, build emotional connections. However, it is an open question as to whether the money off coupons then encourage unnecessary shopping again!

Activewear brand Craghoppers launched their “flagship jackets” for Autumn/Winter, mindfully made from up to 110 recycled plastic bottles. They claim that 70% of their Autumn collection is made from recycled materials – impressive! But these jackets don’t come cheap, with a price tag of £200 each. The battle between conscience and purse strings commences.

The switch from fast fashion to luxury – and ethical implications

Experts predict that the more ethically aware consumer is sparking a preference from fast fashion to high end. Reports have previously filled the news with the poor working conditions in garment factories in China and India, churning out cheap fashion goods for our UK high street. However, in June, The Guardian reported on similar issues being seen in clothing factories right here in the UK…

…in cities such as Manchester, Birmingham, London and Leicester. There is no evidence that factories in the Boohoo and Missguided supply chains pay illegal wages. However, some garment workers in Leicester are paid an average of £3 an hour – way under the national minimum wage – MPs heard in evidence.

MPs found that the Modern Slavery Act was not robust enough to stop wage exploitation at UK clothing factories. There was a lack of inspection or enforcement, allowing factories – none of which are unionised – to get away with paying illegal wages.

The article condemns fast fashion brands (naming a couple above as we can see), specifically calling out Boohoo’s £4 dress, and Missguided’s £1 bikini – which actually caused their website to crash. Although the report goes on to say that Boohoo’s profits were at a record £59.9m at the time of writing.

There’s no denying that this way of producing garments is not ethical, but in a country struggling with unemployment and poverty in the wake of Covid-19, consumers are finding they cannot overlook these cheap deals when their disposable income is lower than ever. Boohoo has come out of this unscathed for now, but could this be something for brands to take into consideration for the future? Over-discounting may be viewed as counterproductive and damaging to a brand. Although fast fashion brands operating in this way may be bringing in the sales for now, they may be losing the respect of their customers, potentially meaning a long-term loss and an unsustainable business.

Similar to the themes discussed in another recent blog post, The Future Of Beauty Marketing, it’s becoming increasingly important to represent diversity and inclusivity in your marketing materials where possible. In February The Guardian published an article describing Victoria’s Secret’s struggle to keep up in this area. The brand has previously been called out for using only white waifish models in their catwalk shows, promoting uniform beauty standards, spurning trans women, and failing to protect models from sexual misconduct…

The recent news that Leslie Wexner – founder of L Brands, Victoria’s Secret’s parent company – will be stepping down and selling his controlling stake in the lingerie empire felt like the end of an era. Wexner’s reputation had been tarnished by his relationship with the disgraced financier Jeffrey Epstein, and he seemed to have lost touch with what women wanted (the company’s stock fell by 41% in 2018).

Despite the brand starting to use a greater variety of models in their marketing materials and on their social channel content, there is a general feeling that this is too little, too late.The article goes on to cite Rihanna’s Fenty x Savage lingerie collection as the antithesis to Victoria’s Secret, using plus-sized, trans and disabled women in it’s shows. There’s certainly an aura of the empowered woman here!

In September, Australia’s #1 selling period and leak-proof underwear brand, Modibodi, launched its latest campaign ‘The New Way to Period’. The campaign included a TV advert, social media pushes, and influencer seeding across Australia, the UK and the US.

Directed by award-winning Sydney-based director Dani Pearce, the script follows the journey of multiple womxn, each with their own nuance and story as they embrace ‘the new way to period’.

Says Pearce: “To honour Modibodi’s philosophy of inclusivity it was imperative that the film capture all womxn, all stories. My vision was to create a film that is part of a much larger social dialogue, with the aim to normalise womxn’s lived experiences.”

*The term womxn is one of several alternative spellings of the English word woman, or the plural women. It is used to include transgender, nonbinary and genderqueer individuals.

In October, Modibodi was shocked to find that Facebook had banned this ad on it’s platform. They claimed the spot violated its guidelines, which block ”shocking, sensational, disrespectful or excessively violent content.” This sparked a Twitter storm, forcing Facebook to backtrack on it’s decision to censor the ads, following a review. The extra PR can’t have hurt the brand, though. 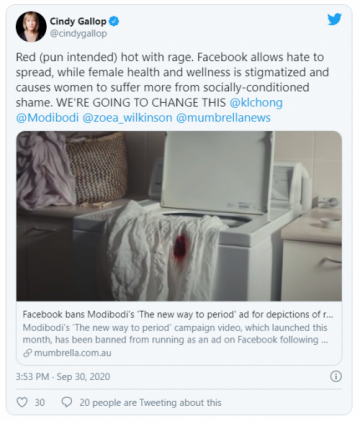 The key takeaway here being that it’s not easy being diverse and inclusive for a brand, but if you aren’t, it’s possibly worse, certainly on your profit line. 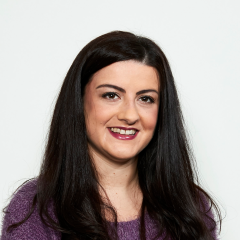 Find out how brand-to-brand partnerships are fuelling the next wave of enterprise growth.